All Aboard for Regional Development and Nature Conservation 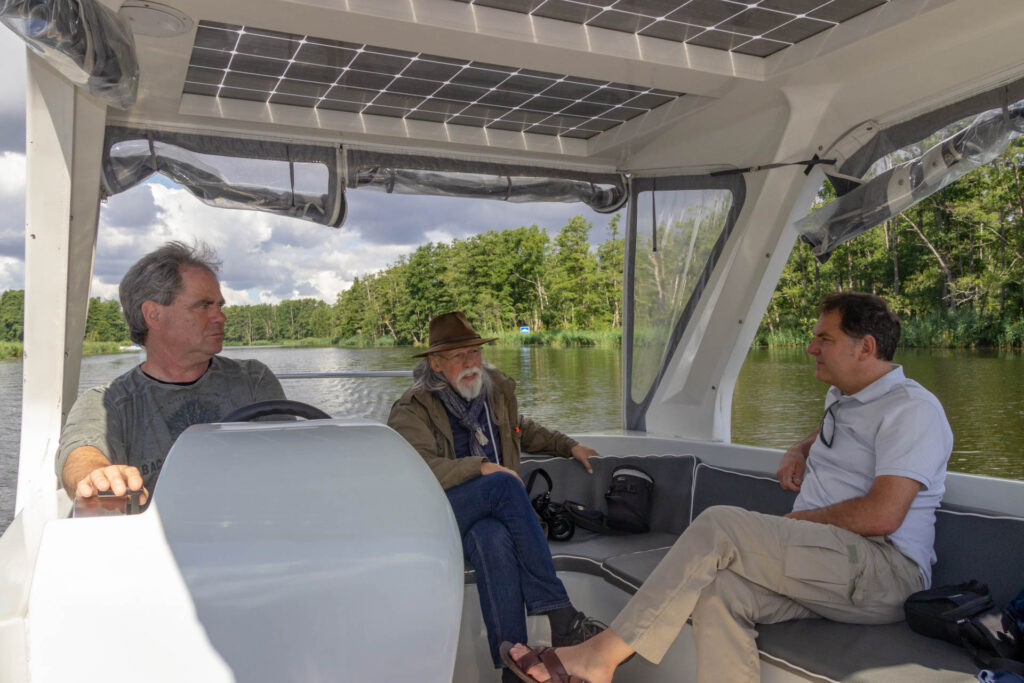 It’s a sunny Tuesday morning in August, some visitors are busy reading the information boards at the Peene River Valley Nature Park center, and Frank Götz-Schlingmann couldn’t be happier to welcome the group of international visitors walking up to the thatched house that moment. He is what people call a “networker”: He connects different stakeholders, lobbies for relevant issues, and helps people joining their efforts for the greater good of everyone. And he is a Nature Guide: Here on the Peene river, the “Amazon of the north”, he takes visitors on a “beaver safari” with a solar-powered boat.

Today, he says with a wink, he invited the group “to make sure everyone is sitting in the same boat.” Everyone, in this case, are representatives of several actors involved with the nature park, who all have distinct visions and ideas for the river valley and the region surrounding it. Rob Stoneman comes all the way from York in England; on behalf of the European initiative “Rewilding Europe” he oversees the rewilding of several tracts of land all across the continent. One of the target regions is the Oder Delta, of which Peene valley and neighboring Anklam Stadtbruch are part. He is accompanied by Peter Torkler, his local counterpart so to say. For five years Torkler built and managed the Ostseestiftung trust, now he works for the NGO “Rewilding Oder Delta”. Here in Stolpe on the Peene they meet with people who face the daily struggle of accommodating nature conservation and rural development at the same time: Frank Hennicke, director of Peene River Nature Park, as well as Birgit Flore, owner of the popular spa hotel Gutshof Liepen. And then there is Günther Hoffmann, a Nature Guide-turned-“brand ambassador” of sorts for the region. These days he not only guides tourists through the marshlands, but also state television camera crews and journalists. His fame is partly due to his work as a photographer – he’s the local nature conservation officer for Anklam Stadtbruch, a vast and pristine wetland area, and he captures the beauty of the landscape with his camera, before sharing it with the world on a popular social media page.

A little later, nature park director Hennicke lays out the latest developments in the visitor center’s bright convention room: “Both region and nature park have seen an impressive development in regard to visitor numbers. In 2014 we had some 40,000 visitors, since then their number has almost doubled.” Theoretically, he claims, the nature park could have a capacity of up to 120,000 visitors per year, as a comparison with nearby Lower Oder Valley National Park suggests. Nature Guide Günther Hoffmann is somewhat critical of that: numbers alone don’t matter, rather how visitors move around and what activities they do is important. Thus, both he and Frank Götz-Schlingmann are critical of the booming houseboat rental market and the large river cruise ships. “It’s an absurd situation,” Götz-Schlingmann explains, “the river itself is a federal waterway, the nature park only starts on both shores. But who is supposed to make sure that houseboat vacationers are actually going to stay away from the riverbanks?”

Rob Stoneman is familiar with such land – or in this case water – use conflicts from other parts of Europe. Yet he is still convinced that conservation work can benefit from nature tourism: “If tourism jobs and revenue are created in the vicinities of wilderness areas, people will be more accepting of conservation efforts.” This is why he deems networking and close ties very important, also across regional and national borders.

Günther Hoffmann confirms that there is a growing interest for the region among Polish tourists, especially those travelling by bike. “Here’s a great example of something we can do better: wayside signs and information boards should at least be bilingual.” He also puts more effort into collaborating with Nature Guides on the other side of the border. Hoffmann and Götz-Schlingmann are both part of the South Baltic Nature Guide Network. Responsible visitor management and professional guiding, they find, are important instruments towards a sustainable kind of nature tourism that is beneficial to both people and nature in the region

After the meeting, when Götz-Schlingmann takes his guest on a short tour of the Peene river, and the group floats silently on the quiet waters, it becomes clear once again: There is an immense potential for nature tourism activities here, but it’s a delicate ecosystem, too. Today’s meeting shows, that if stakeholders cooperate, rural development and nature conservation can go hand in hand.